Thurston County contains 235 bridges: These bridges provide vital links in our transportation network, but cost much more per mile to maintain and repair than roadways. Since there is no dedicated source of funding for locally owned bridges, local jurisdictions rely predominantly on competitive state and federal grant funds for bridge preservation, rehabilitation, or replacement.


The age of Thurston County’s bridges is a primary concern for both local agencies and the state. Interstate 5 and many of its original bridges were built in the 1950s and 60s, so numerous large bridges are likely to need rehabilitation in coming years. 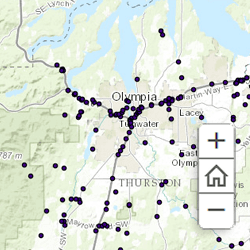 View the Bridges Map
to see the overall generalized condition for the bridges in Thurston County, WA. 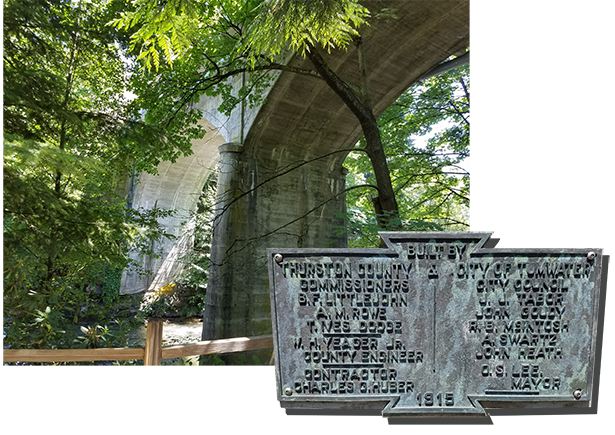 The Boston Street Bridge (Lower Custer-Way Bridge) over the Deschutes River is the only non-railroad or trail bridge in Thurston County over 100 years old. 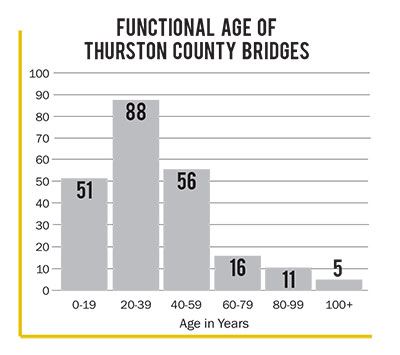 
Older bridges are more likely to be functionally obsolete – and not meet current standards. They may be:

38%
of the 21 I-5 overpasses in Thurston County are functionally obsolete. 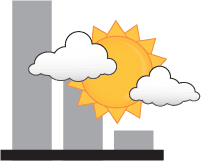 More Information on bridge condition is available on the Sustainable Thurston Report Card.


Good: A range from no problems to some minor deterioration of structural elements.

Fair: All primary structural elements are sound but may have deficiencies such as minor section loss, deterioration, cracking, spalling, or scour.

A strong multimodal network relies on safe and functional bridges for all modes. The Federal Highway Administration requires all public bridge owners to inspect and report on bridge condition once every two years. 97% of Thurston County bridges are in fair or better condition.

45% of Thurston County’s locally-owned bridges that carry vehicles are in Fair Condition. The most cost-effective time to rehabilitate a bridge is before the underlying structure is damaged, so these “Fair” bridges are ripe for rehabilitation.

“Poor” condition vehicle bridges are considered structurally deficient.  While still safe for general travel, weight restrictions may apply.  These bridges are prioritized for replacement or rehabilitation.  The state is currently meeting its statewide performance goal: for 90% of bridges on the National Highway System (Interstate and major state highways) in Fair or Good condition.

Thurston County is home to 12 pedestrian/bicycle only bridges:

Of the local bridges, four are in poor condition, including three on the Chehalis Western Trail (former railroad bridges) and one over Percival Creek.


Federal funding for bridge maintenance, preservation, and rehabilitation is distributed to both the State and local governments.  The National Highway Performance Program (NHPP) supplies around $354 million annually to the State to support the condition and performance of the National Highway System.  Washington State’s 2015 Connecting Washington transportation package includes $87.5 million a year (for the next 16 years) in funding for state highway maintenance, operations, and preservation, which can be used for state bridges. WSDOT has a local bridge program that is around $45 million a year – funded with $23 million in NHPP and $22 million from a Surface Transportation Program set-aside. 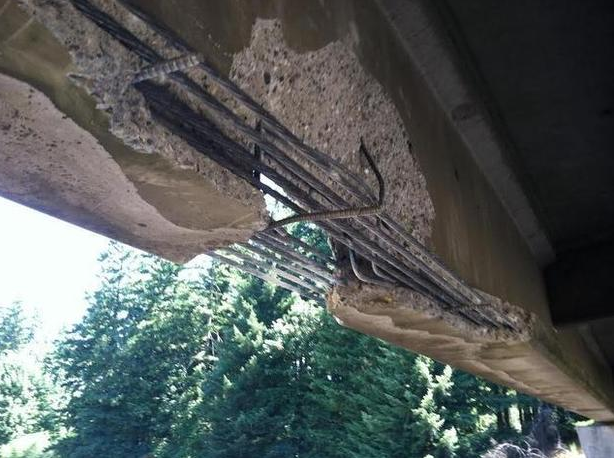 The 93rd Avenue Bridge over I-5 in Tumwater was struck by an over-height load in 2015 and underwent repairs in 2017.  Such low I-5 overpasses are considered functionally obsolete


The current bridge inspection program intends that bridges open to the public are safe.

State Owned Bridges: The state maintains the majority of bridges on the National Highway System. The state’s Bridge Asset Management Plan lays out priorities and various strategies including regular maintenance to extend the service life of bridges and reduce life cycle costs, and preservation to ensure that bridge assets do not deteriorate to a condition that is beyond repair.  Funding levels for this program fall short of preservation needs.

Locally Owned Bridges: Local jurisdictions assess bridge condition, and apply for competitive funding as opportunities allow. Funding for local bridge preservation and rehabilitation is a critical need – including funding for short-span bridges, but adequate funding is not available for a proactive approach.


Other critical needs for local bridges, aside from increased funding, include:


42% of Thurston County’s bridges are in Fair Condition – or the condition where it is most cost effective to rehabilitate a bridge, however funding for preservation and rehabilitation of state bridges is insufficient to meet current needs. Funding for maintaining and extending the service life of locally owned bridges is even more limited. With bridges providing critical links in our transportation network, if adequate funding is not secured in coming years, travelers can expect greater restrictions on travel over bridges – especially on the locally owned bridge network.
Receive Notifications
Agendas & Minutes
Opportunities to Comment
Public Participation
Contact Us
[]