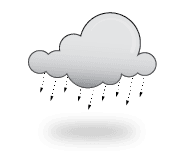 Stormy, concerns for the future.
While there has been an increase in housing built in our region’s urban centers and corridors, the percent of urban-area housing with in a half mile of these area has increased less than 4% since 2010.

Activity density within urban centers and corridors has increased slightly but is still below the levels in the Sustainable Thurston Preferred Land Use Scenario.

Why is this important?

A 20-minute neighborhood is any area where you can purchase some of the basic goods or services you might need on a daily basis — such as buying a cup of coffee, going out for lunch or dinner, buying a gallon of milk or a loaf of bread, or getting a haircut — without getting in a car. 20-minute neighborhoods include urban centers and downtown areas, urban corridors, and neighborhood centers with businesses that serve the surrounding residential areas.

Vibrant urban neighborhoods depend on a mix of people, jobs, and activities. Allowing and encouraging an increasing share of new homes to locate in areas that already have a high concentration of jobs, shopping, infrastructure, and transportation options (such as transit) will help achieve the region’s goal of supporting and creating vibrant urban areas. Being able to walk, ride a bike, or take transit to work, a restaurant, the park, or a store promotes healthy, active lifestyles and reduces congestion on roads.

Allowing and encouraging housing in urban centers and corridors also supports transit. There is a sharp increase in transit boardings and walk trips in Thurston County where the activity density is greater than about 20 residents plus jobs per acre. The more people who ride transit, the more efficient the service, resulting in more people with access to a wide range of jobs, goods, and services without having to depend on a private automobile.

The target of an activity density of 21 jobs and people per acres for urban centers and corridors by 2035 is consistent with the Sustainable Thurston Preferred Land Use Scenario.

Both must be achieved to reach the regional target — that 72 percent of people in urban areas will live in a 20-minute neighborhood. Lacey, Olympia, and Tumwater are making renewed efforts to encourage residential development in their existing city centers and in activity centers along major transit corridors. They are also taking strides to identifying areas suitable for small-scale neighborhood commercial activity in residential areas.

Local planning efforts have focused on looking for opportunities to increase activity in centers, areas of existing activity along the corridors, and opportunity sites for larger projects to anchor new hubs of activity.