The Beginning of Olympia Brewery

Leopold Schmidt began brewing beer in 1896 in Tumwater, near the first permanent American settlement on Puget Sound. By 1902, the slogan “It’s the Water” made Tumwater and Olympia Beer nationally famous. 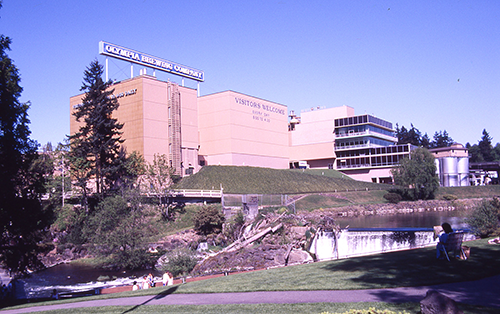 In 2003 the Brewery blew the 5 o’clock whistle for the last time. Over 400 employees lost their jobs and the buildings and facilities have sat idle ever since. This site sits in the heart of old Tumwater, along a vital urban area that connects Tumwater Town Center and the State Capitol in Olympia. We need the community visioning to honor the history and consider the best new uses for this landmark property.

How can the Olympia Brewery site once again strengthen the community and provide jobs, housing, and community space? In early 2011 this question was explored through a site evaluation, market study, focus groups, and public meetings.

Thank you to the hundreds of people that attended the public meetings or sent their ideas in by mail or email. The consultants blended these ideas with an evaluation of the site, the buildings, and the market into a report that was presented to the Tumwater City Council on Tuesday, September 13, 2011.

The City Council adopted an Action Plan on December 6th, 2011. The Action Plan embraces the recommendations in the Final Report, and identifies a wide range of activities and community stakeholders. It creates the framework for future work and collaborations.

Get an Inside Look

For an inside look at the Olympia Brewery and to find out what happens next in this exciting project, please view our short video The Olympia Brewery: An exclusive look by local media group Einmaleins.